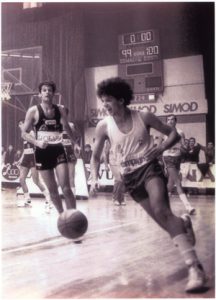 The winning team of the Lipik 3×3 Challenger wins the prestigious award – Dražen Petrović Trophy – in memory of one of the greatest European and world basketball players of all time.

With the Petrović family approval and support, and cooperation with The Dražen Petrović Memorial Center we proudly award this trophy since 2008.

Dražen’s basketball career started on the street basket just in front of his building in Šibenik, and as he was returning to that court every summer even when he was an NBA star. This makes the Trophy even more meaningful and important.

Seeking a bigger arena after his career start in Europe, Petrović joined the NBA in 1989, as a member of the Portland Trail Blazers. After playing mostly off the bench that year, Petrović experienced a breakthrough following a trade to the New Jersey Nets. While starting for the Nets, he became one of the league’s best shooting guards and was in consideration for being the best shooter ever. Petrović’s career and life were cut short after he died in a car accident at the age of 28.

Petrović is considered the crucial part of the vanguard to the present-day mass influx of European players into the NBA. Petrović’s #3 was retired by the Nets in 1993, and in 2002, he was posthumously enshrined in the Naismith Memorial Basketball Hall of Fame. In 2013, he was voted the best European Basketball player in history, by players at the 2013 FIBA EuroBasket.

Dražen Petrović was an extraordinary young man, and a true pioneer in the global sports of basketball. I know that a lasting part of his athletic legacy will be that he paved the way for other international players to compete successfully in the NBA. His contributions to the sport of basketball were enormous. We are all proud of the fact we knew him.

It was a thrill to play against Dražen. Every time we competed, he competed with an aggressive attitude. He wasn’t nervous; he came at me as hard as I came at him. So, we’ve had some great battles in the past and unfortunately, they were short battles.